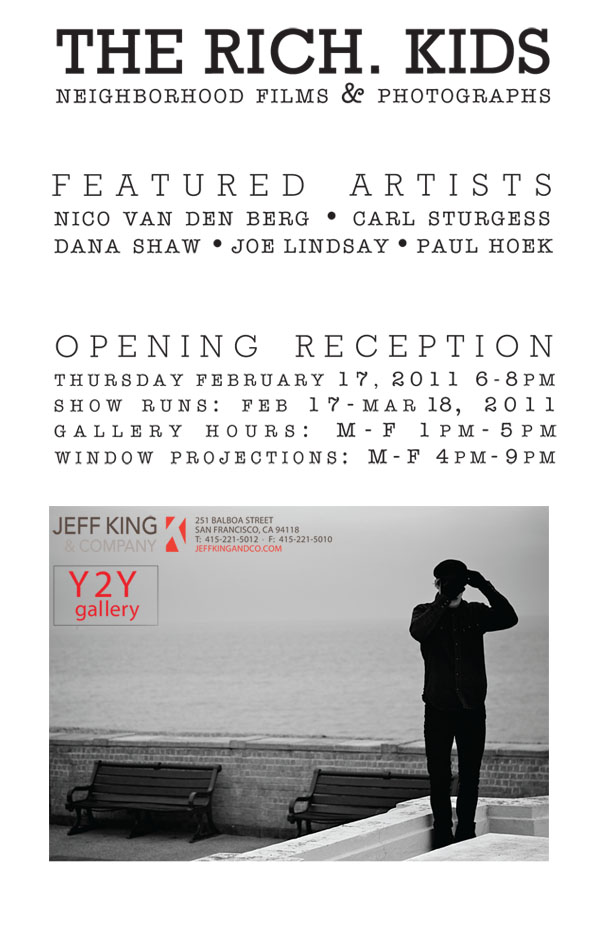 The Rich. Kids calls attention to the fertile creative community that exists within just five blocks of our own gallery space and miles from the inner city’s typically recognized “artist communities.” The Rich. Kids are a group of collaborators, colleagues and friends who came together at the Digital Filmmaking & Video Program at Art Institute San Francisco California and have since built a neighborhood community, ideology, and creative synergy that is all their own.

In his short film series, Nico van den Berg offers an intimate portrait of the Dutch visual artist, Paul Hoek, in the strenuous physical process behind his water and earth paintings. While documenting the mysterious and uncontrollable elements of nature that inform Hoek’s artwork, Nico employs intimate cinematography to show that the process is just as beautiful as the outcome. Paul Hoek is expected at the opening with a few of his own works to share.

Dana Shaw is an artist and filmmaker concerned with harnessing the hand-made crafts of past generations to enhance contemporary art making practices. Shaw presents a short film, “Tribute,” trialing the fusion of digital photography and painted celluloid frames for a colorful, abstract movement that pays homage to mid-century experimental filmmaker, Len Lye.

Filmmaker and photographer, Carl Sturgess, shares a series of un-staged portraits cataloging the moments in which ideas, creativity, knowledge and inspiration are exchanged. Through these candid photographs in the living rooms, kitchens and rooftops of friends, Sturgess highlights the value of his own creative community as an inspiration for his photography and filmmaking.

Joe Lindsay often finds the most inspiration for his photography in the calm of the first and last moments of daylight, where urban landscapes and open fields demonstrate the importance of darkness in natural lighting. Lindsay’s photographs showcase San Francisco’s many nuances through the lens of his own rural Pennsylvania upbringing, highlighting the quaintness and quiet of this bustling city.

Please join us for the opening reception of The Rich. Kids: Neighborhood Films & Photographs at Y2Y Gallery on Thursday, February 17, 2011 from 6-8pm. This event is free and open to the public.